Today I bring you not one, but two photo moments revolving around the theme of numismatics. Numismatics is the formal name for the popular pastime of collecting coins. I have collected coins since I was very young. I acquired them from friends, family and even local shopkeepers whom I would pester to give me foreign coinage that they had received in change handed to them by customers. Within a few years I had put together a portly collection consisting of various world coins of most denominations, sizes, shapes and metals. As time went on, I began to realise that it was going to be a nigh on impossible task to acquire every sort of coin in existence. To make my life easier, I decided to specialise. At one point, I was managing three separate themed collections. Vintage coins minted before 1971 (including British and colonial pre-decimal coinage), alongside another collection of pieces made from the extremely light and cheap metal aluminium (aluminum), a material highly favoured for minting low-value coins in the countries behind the ‘Iron Curtain‘. A third, much smaller collection was dedicated to coins produced in 1984, the year of my birth.

Nowadays, I still retain my coin collections, but I have to admit I don’t devote much time to them. I was until recently trooping about on auction sites, especially eBay, looking for new aluminium coins to purchase, but even those shopping sprees haven’t taken place in over three years. Neglecting a hobby is hardly the way to maintain it, so I hunted through the storage space in my bed, and pulled out these coins which form the centrepieces of this weekend’s Photo Moments. This is my way of paying respect (and making up for neglecting somewhat) this noblest of hobbies. It’s also a chance to show how coins can be objects of beauty and how they are mute witnesses to history, each elaborately decorated disc of metal carrying its own story to tell. 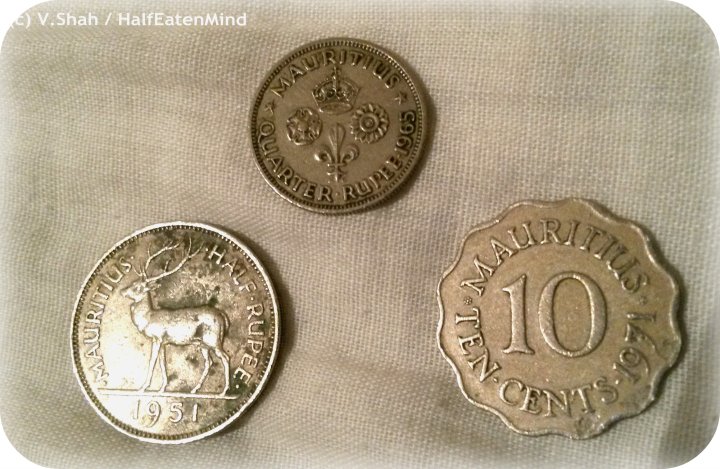 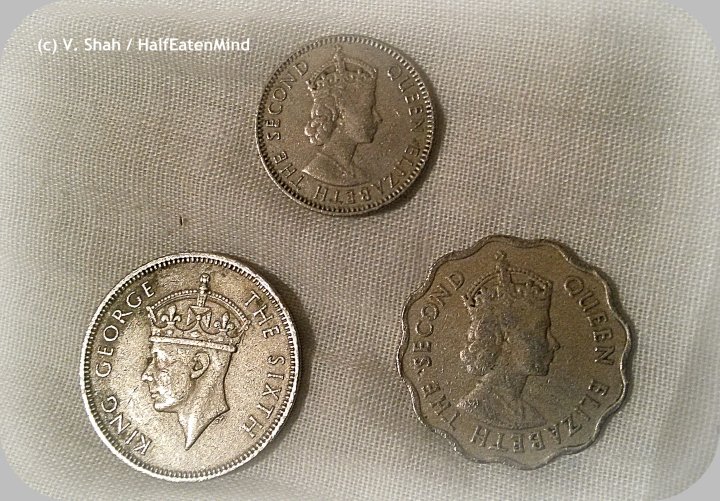 The coins above come from the Indian Ocean island of Mauritius, which is a beautiful country off the coast of Madagascar. They were given to me by my mother, who brought them with her when she came to the United Kingdom in April 1983. She used to keep them in a brown handbag along with her old chunky black Mauritian passport and various documents. You have here a quarter-rupee coin which was issued in 1965 and is about the size of a current UK 5-pence piece or slightly bigger than an American dime. The quarter-rupee is literally a quarter of a Mauritian rupee, also known as a 25-cents coins. The rupee that us Mauritians use is divided into 100 cents. The name, as you might have guessed, comes from the Indian rupee, which was used as currency in Mauritius during colonial days, but the two currencies nowadays bear no relation and are not pegged to each other.

Below that is a half-rupee (50 cents) and a very distinctive 10 cents piece with a unique wavy edge that numismatists term ‘scalloped’ – as it is reminiscent of the ribbed edges of the mouth of a scallop’s shell. The wavy edge was another common feature we had with Indian coins. Until the middle of last century, both Mauritius and India were part of the expansive British empire, and one story about the colonisers issuing coins with such strange shapes is that they could be recognised by people who were illiterate or blind.  The 1/2-rupee has a sambar deer on the obverse. Sambars were introduced to Mauritius for hunting, but are sweet docile creatures. If you ever visit the botanical gardens in Pamplemousses, up in the north of the island, you can quite happily feed them by hand.

All of the coins bear the effigy (portrait) of the reigning British monarch of the time, in keeping with the British design standards for noth their domestic and colonial currencies. Mauritius was an outpost of the British Empire until 1968, when we achieved self-government under a similar system to what is used currently in Australia and New Zealand. The Queen remained head-of-state, with her affairs in Mauritius taken care off by a Governor-General residing in the capital of Port Louis. In 1992 Mauritius became a republic, with its own sovereign right to elect its leader. By then Mauritian coins had shaken off the old colonial overtones, with the head of Queen Elizabeth II replaced with the image of our first prime minister and ‘father of the nation’ Sir Seewoosagur Ramgoolam KT. You can see an example below.

These coins mean a lot to me. They are tied with my family’s history, as my mum brought them with her when she moved to Britain permanently after marrying my dad, who was from here. They are peaceful reminders of a formidable part of both Mauritian and world history and a link to my maternal homeland. I also had a rather worn 5 cents piece which a big hulking copper coin, which would have been the oldest coin I got from Mum. It was minted in 1944, but sadly it went missing while I was moving from one place to another. It would have made a good addition and contrast to the images I made.

The rupee (called in Mauritian “rupi Morisyen” and in French “roupie mauricienne”) is the national currency of Mauritius and is divided into 100 cents. It was officially established in 1876, replacing the Indian rupee, British pound sterling and a local form of the ‘dollar’ that was the confusing financial situation beforehand.  It was also used in the Seychelles until 1914, when it itself was replaced by the Seychelles rupee.

The current Mauritian coins now in circulation are minted by the Royal Mint in Llantrisant, Wales, UK and shipped out to Mauritius for use. The banknotes are issued by the Bank of Mauritius, which has been responsible for them since 1967.