This past week, a small, extremely bundle of joy entered our lives. Soft, with big eyes and a quietly playful nature, our new arrival has won hearts and has become the source of a long line of ‘oohs’, ‘aahs’ and ‘ain’t she so cutes”. A new baby has made her home with our family. She’s not a baby human though. She’s a baby rabbit. A miniature lop-eared rabbit. And she goes by the name of Ruby.

The story of Ruby begins with a man in Romford and an advert on the online classified website Gumtree. My sister, Alia, has to recently give away her dog Zeus to another family as his barking was causing complaints from neighbours on her street. Zeus’ departure left a big hold in her heart and she decided to find another animal companion that would be less noisy and housetrained. My brother Azzy came across an advert from a guy in Romford, Essex, located near where he lived, who was selling mini lop kits (baby rabbits) for £20.

Soon Ruby was to make her new home, complete with improvised hutch, blankets and food, in the dining room of my sister’s flat. At first she was shy and quiet. Bewildered by her new surroundings and family, the eight-month old rabbit spend a lot of time hiding under the dining room table, but soon her playful, gregarious and mischievous personality began to reveal itself. Before long she had grown so confident that she mustered the courage to chase my niece, Shaniya, out of the kitchen, after choosing her as her new playmate. Shaniya, who had never seen a rabbit before, was quite unnerved by this and ran screaming as Ruby hopped at speed after her. Now they are inseparable.

I got to meet little Ruby this past Friday at my mother’s place near Ilford, Essex, where Alia has brought her over to show all of us. I was stunned by how adorable and small she was. With large, floppy ears, a round fuzzy head and chubby stomach, she was the rodent equivalent of a little plump toddler. Her fur was soft to the touch, indeed my first impression of her as I stroked her was that she had the texture of a big bundle of cotton wool. At first, among strange surroundings and new faces, Ruby was in bashful mode, seeking a hiding place behind one of the settees, but before long, the crazier and tinier version of Roger Rabbit came out to play. With a few reassuring words and some alfalfa pellets from her “mummy”, Ruby was bounding around the living room. She ate through a whole handful of lettuce like a mincing machine. She chased my mum’s pet cat Lucky out of their dining room, despite Lucky being more than a year older and nearly twice as large. She then hopped to my youngest brother Arjun, who has fallen asleep on the floor after a long day at school. She began sniffing him, bounded over to his face and promptly began sniffing it too. He didn’t move a muscle. After acquainting herself with Arjun, she then jumped over him clear as a shot and retreated behind the sofa again. She even nibbled a chunk off the analogue stick of a Playstation game controller that was sitting in the corner of the living room, as if to leave a permanent reminder of her visit there. Everyone was won over by her cuteness and charms. Apart from her feisty personality, Ruby’s other talking point was her colouration. Mostly a dark greyish-brown all over, she had a ginger patch behind her neck, which made me comment humorously that maybe she was a relative of the radio DJ and TV personality Chris Evans, who has ginger hair. Jokes aside though, she was very much unbelievably sweet and amusing and has softened everybody’s hearts.

A mini lop rabbit. This picture posed by an actor rabbit.

Ruby is a miniature lop-eared rabbit, also known in among rabbit breeders and keepers as a ‘mini lop’. Her breed is relatively new in existence and she probably traces her origins to a group of Holland lops, rabbits with low-hanging ears that lived in the Netherlands during the 1970’s. In 1970, a breeder over there named Adriann de Cock, who had developed small Holland lops since the 1940’s, began aiming for a rabbit that was of small weight, having set himself a target of breeding animals with an average weight of 1.5 kilograms. By 1980, these new reduced-size Holland lops were being imported into the United Kingdom by another breeder, George Scott. Based in the county of Yorkshire in north England, Scott was excited by these new bunnies and arranged to have them introduced to British rabbit fans via obtaining them from a Dutch contact.

Their small size, peaceful yet playful nature and ease of maintenance soon made them a good choice among would-be pet owners looking for a companion that could be kept indoors or outdoors in a small hutch or rabbit run, especially for city dwellers with limited space. The Miniature Lop, as it came to be known, is now established as a popular entry in rabbit competitions and shows. The breed was recognised by the  British Rabbit Council in 1994. If properly cared for, a mini lop can live from anywhere between 7 to 18 years.

In honour of our new bunny, the Half-Eaten Mind is pleased to show a selection of photographs of Ruby, taken from her first week with her new family and from her visit to my mother’s house. Many thanks to Alia and Anjali for taking these pictures and enabling me to share them with you all. 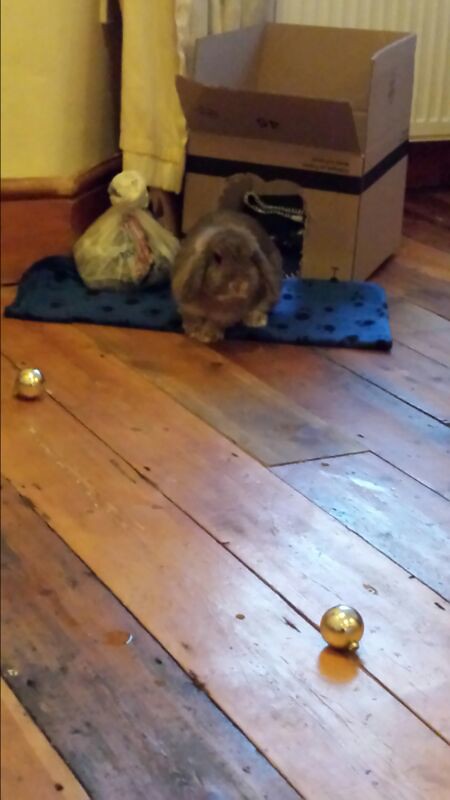 Ruby near her improvised hutch. Photo by Alia Ropun. 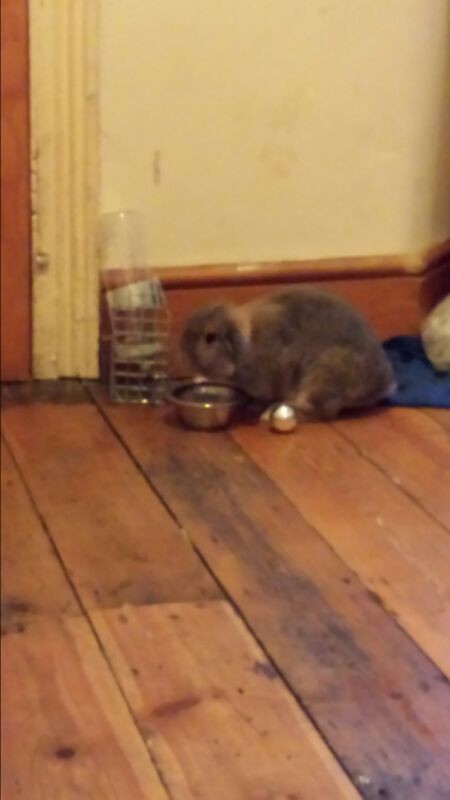 The chubby bunny has a well-earned drink. Photo by Alia Ropun. 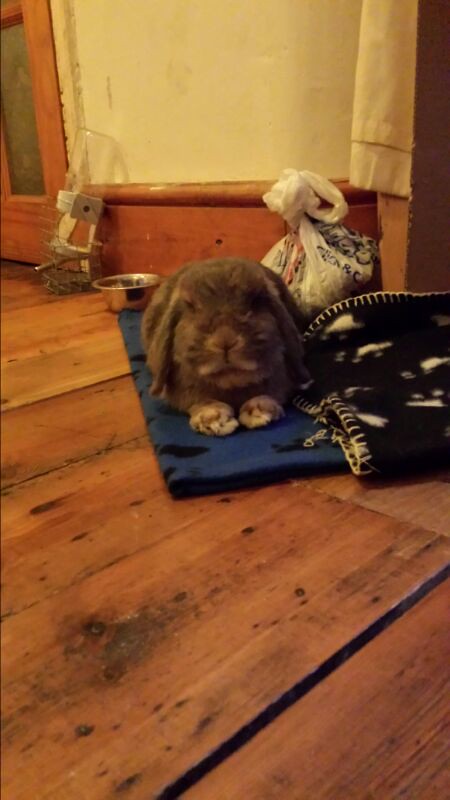 Ruby does her best ‘grumpy’ face for the camera while resting. Photo by Alia Ropun. 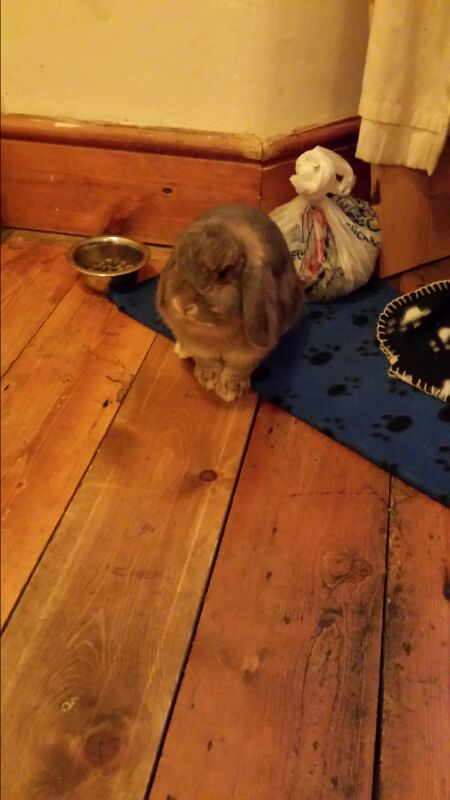 Looking for something to chase. Photo by Alia Ropun. 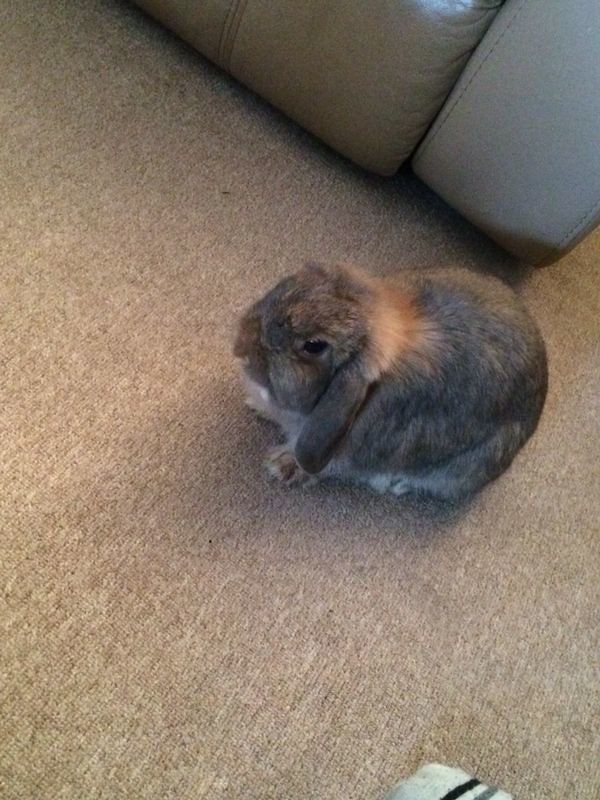 Ruby at my mother’s house. She’s figuring the place out. Photo by Anjali Shah. 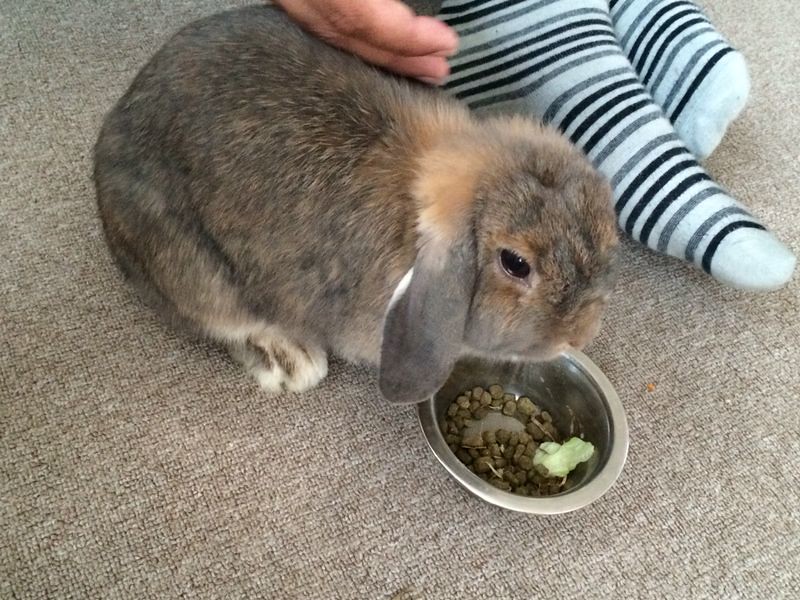 Ruby relaxing by my feet while I stroke her. Photo by Anjali Shah. 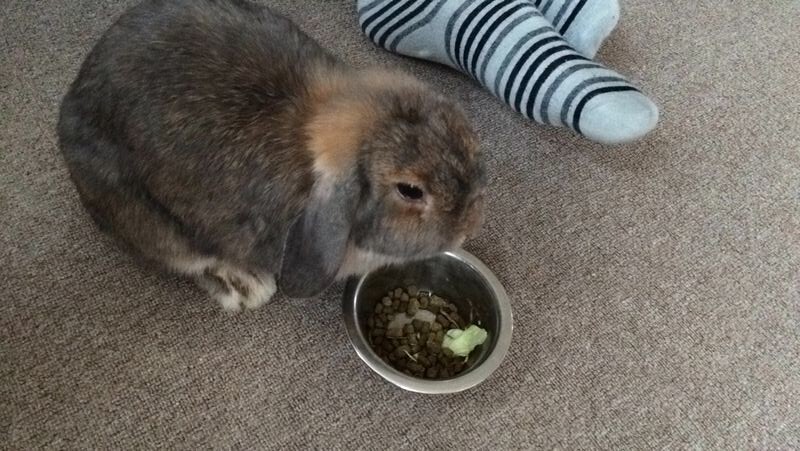 The little rabbit tucks into alfalfa pellets and fresh lettuce after a hard hour’s hiding and exploring. Photo by Anjali Shah.

Of course, the modern way to celebrate the arrival of a new member of the family is to splash it on social media. I am not immune to that. Here’s how Ruby got to say “what’s up, doc!” on Twitter.

My sister's new rabbit!!. Not yet officially named. Eight months old and as cute as a button @chinxz786 pic.twitter.com/58oNQJVwD1

Ruby getting acquainted with my feet. pic.twitter.com/wOidLCxVoT

13 thoughts on “RUBY: The newest…and smallest member of our family.”