As many of our blogging friends may know, the Half-Eaten Mind maintains a Twitter account, where I share the latest happenings and articles to come out of a partially digested brain. It just came to my attention that it has been exactly a year since we began tweeting our mind on one of the world’s most influential and bitesized social networks.

I was looking through my Gmail account from where I receive all mails regarding the HEM Twitter feed and came across one from the Twitter HQ in San Francisco, California, USA. It said:

Let everyone know that it’s your Twitterversary.”

So we’ve been one year on Twitter. That works out to 8,106 tweets, 2,001 followed accounts and 976 followers, as of Tuesday 24th June 2014. So we do not have the legions of followers of famous celebrity accounts like Justin Bieber and Lady Gaga, for example, but that’s still an impressive tally. Of course, I cannot stress enough that each and every follower counts… We are also big on multimedia. The HEM account currently has 92 videos and images uploaded.

Well it’s mainly a promotion tool for the blog. Our public face. As any online business expert will tell you, social media counts for everything in getting the word out and making your blog, in this case, more accessible. Twitter has millions of users and accounts and your tweets can very easily reach an audience far greater than word-of-mouth or paper-based promotions, perhaps more than the website or blog can generate itself.

The Twitter feed works functionally as a means of showing off new articles. Whenever a new blogpost goes online, a Tweet is automatically created by WordPress straight onto the HEM account. I then manually access the account and pin the tweet to give it prominence for any visitors. I also share other bloggers’ posts, with priority given to those who like articles on the blog. I’ll retweet the article on their site which I like as a reciprocated thanks for visiting the Half-Eaten Mind. I also retweet development from the Daily Post and Hot Off The Press online newsletters from WordPress and news stories furnished via Twitter or LinkedIn. I also retweet articles on blogging techniques or handy advice concerning the noble art of blogging.

I also use the account as a source for news and article ideas which feed directly into the blog. I follow several hundred news and media organisation accounts which provide breaking news and features which saves me having to sniff around the wider internet looking for that next ‘scoop’. Separate from the media section, there are many other bloggers who also tweet their work and I make it a habit to follow other bloggers, mainly those already following HEM on WordPress. We also have a contingent of followers who are Tweeps who are outside either blogging or journalism and media, both individuals and companies. I aim to follow everyone but currently we have reached our following limit which is imposed by Twitter and we cannot do much about it.

The account also has links with providers of journalism resources which is helpful for a bit of self-education and awareness on new issues and techniques affecting the world of news reporting across all platforms.

All accounts added to our followers/following portfolios are sorted into one of several lists. That is partially because I am obsessively organised, but also to help place people and businesses into suitable categories for when, for example, I need to find a news story or locate a blogger. In return, we have been added and always subscribe to, other people’s lists. We consider it a big honour and appreciation of our work when we are added to your lists.

This is for accounts on developments and reactions in the field of journalism. This includes educational accounts on the media, press freedom, influential and aspiring journalists, jobs, journalism tools and news on the industry.

This is the list of all personal (not company) accounts we follow. Often many readers who visit our blog decide to subscribe to the Twitter account so get information at their fingers without needing to be on WP or overfilling their inbox.

These are miscellaneous businesses that follow us on occasions who are not connected with newswriting or reporting per se. It runs the gauntlet from South Asian promotional events, facts on whales and alcoholic drinks to flower deliveries, human rights and pubs in London.

Our largest list. This consists of mostly news media organisations and some journalists. A very important list as it supplies much of the blog’s news content when I am using Twitter. We follow both local, national (British) and international news providers from TV, online, magazines and newspapers, across language, political leaning and reporting style to aim for an unbiased and multi-angled coverage of the world’s news.

We are also proud to be a part of the following lists:-

‘Twitterversary’ is a portmanteau (word-blending) of the nouns ‘Twitter’ and ‘anniversary’. In its basic form, it is a fun way of marking your arrival on Twitter. The MacMillan online dictionary describes it as “the anniversary of the day somebody started using the microblogging site Twitter”. 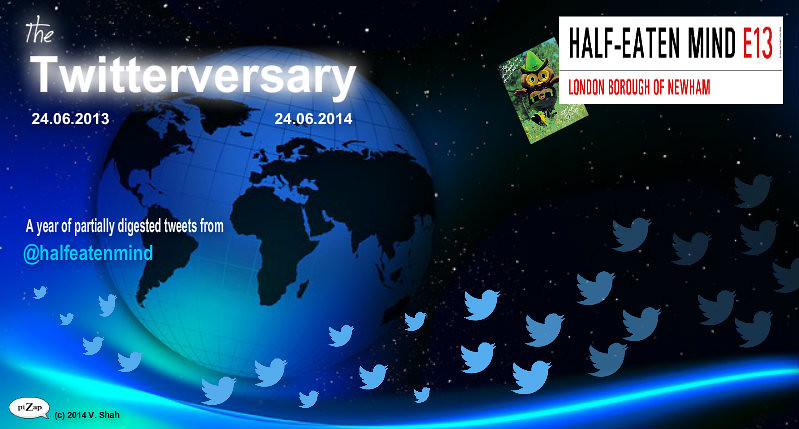 To celebrate the HEM Twitterversary I produced this cool graphic to illustrate social media’s impact on the blog and incorporating elements particular to HEM, especially our new “London road sign” logo and mascot Woodsy. The globe in space does look ‘pretty’ but it also reflects our focus on news from all four corners of the world, and the dominant blues and turquoises utilised in the original wallpaper image by Geralt chimes in nicely with the flock of Twitter birds. Twitter is valuable in disseminating both news and my writing to more than 200 countries and territories worldwide.

13 thoughts on “HEM TWITTERVERSARY: Celebrating one year on Twitter”