Say R.I.P. to your amazing twenties

As you enter your boring thirties

Say goodbye to your crazy ways

As you strive towards accountability

Don’t worry, I am just fooling around

Don’t let this rhyme bring you down

You will have the best time at thirty

So chill out, relax and take it easy

Yesterday, Saturday 4th October 2014, I officially kissed my eventful years of being a twenty-something goodbye and said “Oh hi…er…Hello” to my third decade and thirtieth year of milling around on this green, green planet. Needless to say, while you cannot have a cat in hell’s chance of stopping the advances of age, it still was a bit of shock to me. I am actually going to be 30. Thirty!!. That’s a big chunky number. Part of me was telling myself that now I’ve reached the big Three-Zero, maturity and reflection on life was the name of the game, then there was a part of me that felt almost geriatric. Fair enough that I already got my first few white hairs some years back and being tall brings some aches and pains, but this morning I woke up with some noticeable leg cramps. I’m surprised I wasn’t dreaming of dusty suitcases from trips to the hospital, long post office queues and those god-awful 50+ life insurance adverts that infest daytime TV. But thirty is hardly old-age pensioner. It is a decade that will hopefully bring big changes into my life. Marriage, settling down and starting a family, being hired into a better-paid position (hopefully in the media), moving into my first flat,…and many smaller milestones that will turn when and whether. Being thirty is a transition point, a halfway house between the carefree and carelessness of youth and the responsibility, organisation and enhanced maturity of older adulthood.

My thirtieth birthday was a small and private affair with family, with of course many well wishes from friends and acquaintances new and old, and special greetings messages from the extended family in Mauritius. On Friday night (the 3rd of October) I visited my mother, who is recovering from a recent leg operation, to see how she was doing and to have a special dinner with the family. We ordered the food from a local takeaway and I made sure to get my favourite. A lamb doner kebab. This one was tasty but did reek of onions. Sadly there was no cake but I got lots of dosh and a gift box of Ferrero Rocher chocolates, and most importantly the love and best wishes of my family together. My 5-year-old niece even pulled out a little gift from her jacket pocket as she came to hug me and wish me a happy birthday in advance. The gift was a small blue toy car. She must have chosen it especially for me. Once I get a decent-sized place of my own to live in, her toy auto is going on the mantelpiece or shelf. I then went with my niece and my sister to her place, where I spent a short while with her and her husband, before heading off to my home.

Come the big day I was as happy as Larry. I don’t know who Larry is, but I was feeling great. On Facebook, I arranged with my brothers to go to the nearby Westfield Stratford City shopping centre to go bowling and then later, the cinema. It started off a bit crazy though. My brother didn’t have his phone with him as it was in a repair shop having its speaker fixed. He had been having no end of problems with that phone. While chatting to him on Facebook, I had also forgotten to say to him exactly where we were going to meet up as Stratford is  a big place. Cue me waiting like a bum at the area’s bus station for one and a half hours wondering where the hell my brother was. He had been dropped off by car and was also planning to get some clothes shopping in, with the money he received for his own birthday, which falls one week before mine. After frantically Whatsapp messaging my other siblings to try to get to the bottom of this missing persons inquiry, I decided to head up the short walk across the glass-sided bridge to the Westfield shopping district. I started hunting around the nearby clothes shops to see if I could spot the missing brother. No luck. I scanned the crowds, hoping for a glimpse of him. Nah, not happening. Then something told me to head to the Vue cinema that sits on the third floor of the shopping mall. I thought it unlikely he would be there, but I took a chance anyway. Long story short, once I arrived at the picture house, I saw my brother on the balcony of the cinema’s courtyard. He had borrowed another shopper’s phone and was calling home. At the same time as I saw him, one of my sisters messaged me to say where he was. A very strange and almost psychic experience I think. Thankfully we was reunited and went to the bowling alley. All Star Lanes, which is based a very short walk from the cinema, is basically a bowling alley for all ages. It also has an American diner-themed cocktail and milkshake bar with a restaurant serving typical diner food. We booked our lane for the two of us (my other brother was sorting out transport to arrive later to watch the movie). Unfortunately we were told by reception that there would be a twenty minute wait before the lane would be free to use and they armed with a buzzer that looked like an oversized car alarm key. Me and bro decided to kill time by going to the clothes shops. We visited adidas, Topman while my brother tried to find a hoodie he liked. We saw a lot of cool and ridiculous stuff. Ridiculous in both price and aesthetic appeal. Sadly brother could not find the hoodie he wanted. The buzzer apparently went off, but I felt and heard nothing, though I was holding it in my hand to the point my palms were sweaty and probably fusing with the plastic.

We reported back to All Stars and because we had missed the buzz, we had to wait another ten minutes. Me and little brother went to the milkshake bar and ordered a shake each. He ordered vanilla, I got one flavoured with Oreos, in keeping with the American theme. Well mainly really because I have a primal weakness for Oreo-flavoured milky beverages. It was delicious. I was even scooping out the cookie dough like sludge from the bottom of the glass with my straw and eating it because, blimey, it was THAT good. Me and little bro had the third lane from the left and while he was a bowling veteran, this embarrassingly was my first time. I even had to figure out which fingers went into which holes in the ball. I had fortunately played enough bowling of the virtual variety that that experience helped me pick the real thing very quickly. Although little bro triumphed over me, beating my score of 74 points with his haul of 96, we both managed to do I think around three strikes combined, with myself demolishing all the pins on my third go on the lane. It was quite stuffy in the alley though and not even the ice-cold shake could cool me down, but it was a brilliant time.

We sauntered around some more outlets selling designer garments. This time we hit up the Nike Shop and admired their sportswear, their mind-boggling array of trainers, including a ‘trophy case’ display of them pinned to a wall. We saw lurid pink ones, technologically-advanced ones, stylish ones and even ones with holograms and ones that were fitted in material that looked like the metallic skins of bluebottle flies. I saw a few Nike brand basketballs lying around and was tempted to dribble like the great Shaquille and score a triple-pointer. But being booted kicking and screaming (haha, booted) out of Nike by security is not the best way to remember your 30th birthday.

Towards the end of the night, my other brother finally arrived after catching a train from further east and we had booked our tickets. The film we got into was “A Walk Among The Tombstones” starring Liam Neeson. Obviously as it’s a new film, I don’t want to give away any spoilers. I will say that he plays a washed-out former policeman. Divorced and trying to stay sober, he operates as a private detective. A drug trafficker calls on his services to help locate the kidnappers who took his wife. If you are planning to see this film, keep an eye for TJ. He’s hilarious.

My thirtieth birthday may not have been as monumental as other peoples’, but it was a tight family affair. It put a smile on my face and joy in my heart. Reading the many social media messages from my friends and family, plus the texts and calls was the real icing on my birthday cake. Thank you to everyone who made it special. You all made my thirties much, much sweeter.

P.S. For the Half-Eaten Mind’s regular readers on WordPress who were wondering what happened to my usual Saturday article, now you know why!!

Here is a small selection of pictures from my birthday:- 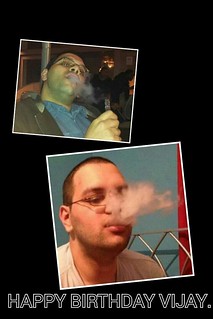 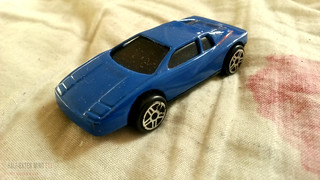 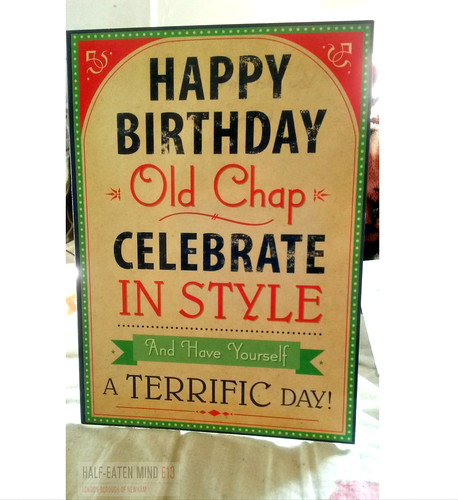 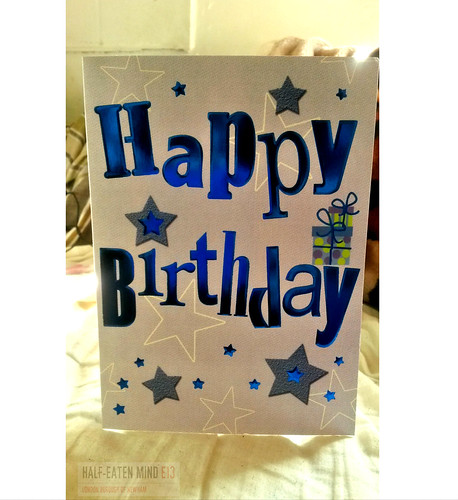 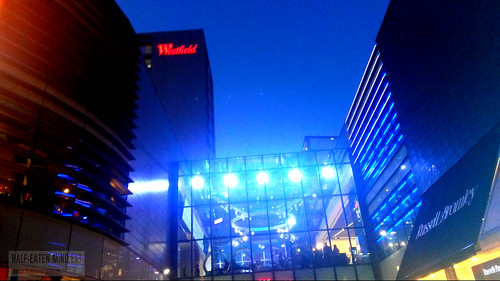 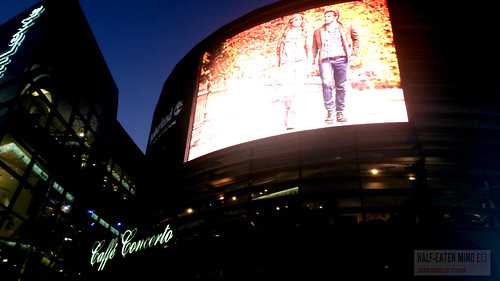 Photo 1: A birthday ‘e-card’ made by my cousin Vipul using some of my Facebook pictures. The theme he ran with was ‘shisha’. One of my hobbies, although it’s been a while since I made an acquantaince with a hookah (stupid snigger). If you’re wondering, my usual flavour is double apple, but I’ve done everything colour in the flavour rainbow, from chocolate to melon.

Photo 2: The toy sports car (Cadillac…Lambo?) gifted to me by my niece Shaniya.

Photo 3: An ‘old chap’ greeting card given by my sister and her family. She just loves to call me ‘grandpa’ now *rolls eyes* *laughs*. I really like the vintage look though, even if it makes me feel a smidgen dessicated.

Photos 5 and 6: Some night time pictures I took of the buildings at Westfield Centre in Stratford City as we waited for my other brother to arrive. The shopping centre does look amazing at dusk.