A man dressed as a clown who was fundraising for victims of terrorism found himself accosted by council workers who confiscated his donations bucket, SWNS news agency reported this Friday.

Pensioner Tommy Armstrong, from Greenock in Inverclyde, Scotland, had visited the city of Manchester in England to collect spare change for victims of the recent suicide bombing there, when employees of the Manchester city council approached him while he was about to collect donations for a special charity 10-kilometre fun run he was due to take part in. The council staff demanded to see Tommy’s fundraising permit, which he did not have. They then allegedly emptied his bucket and confiscated the donations. Armstrong was said to have been left ‘close to tears’ by the incident. At that time, he was dressed in full clown costume and face make-up. 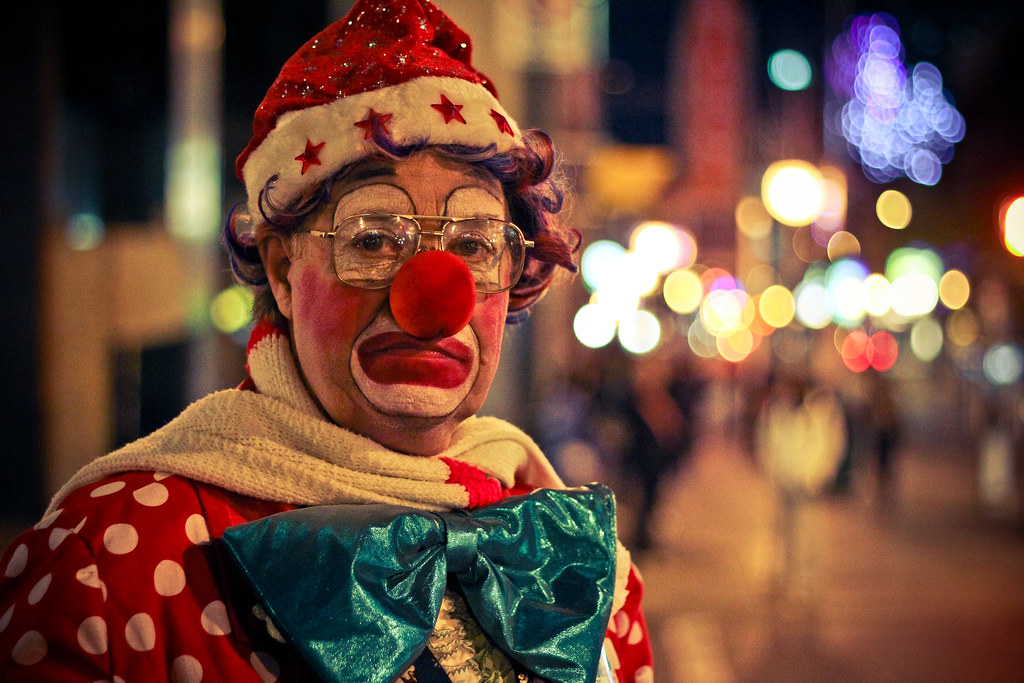 Armstrong has raised nearly £200,000 for charity in a fundraising career spanning thirty years and has frequented the streets of Manchester for the past decade. He was renowned in his native city for his habit of dressing in complete clown regalia to entertain shoppers and tourists and gather money for charity. He had even appeared on a daytime TV show ‘This Morning’ with the ITV terrestrial station last year. He told SWNS: “My race didn’t start until 3pm, so I went to St Ann’s Square first to see the flowers that have been left there in tribute to the victims.

‘I was wearing my clown’s gear and pushing my usual pram with the bucket on it.’

‘I didn’t ask anyone for money at that stage, but many people had put notes and coins into the bucket.’

‘Two officials came up to me and asked if I had a permit to raise money for the fund.’

‘I told them I had been raising money at Manchester and other big races around the country like the London Marathon for years, and I had never heard anything about a permit.’

‘They took my bucket and counted all the money on a wall. People were walking past wondering what was going on.’

‘It was really embarrassing and made me feel like they thought I was trying to collect money for myself. They were very rude and treated me like a criminal.”

The donations confiscated by Manchester council was believed to be in the region of £44. Tommy Armstrong also told SWNS that he felt the council’s rough treatment of him was unwarranted and that they should offer an apology. He added: “They gave me a piece of paper with their names and a phone number for Manchester Council, asked for my name and address and said they would send a receipt, but I still haven’t received a thing.

‘These guys hounded me. I was really angry about it and close to tears. They even took my sign away from me.’

‘I travelled down there at my own expense on an overnight bus to try and help, but their attitude seemed to be that I was dressed as a clown so they would treat me like a clown. I think I should get an apology.”

Manchester City Council said that they had required fundraisers collecting money for victims of the Ariana Grande concert attack to carry officially issued permits after a number of fraudulent fundraising drives were reported to them in the days after the atrocity, in which local man Salman Abedi detonated an improvised shrapnel bomb at the Manchester Arena, killing himself and 22 concertgoers, many of whom were parents and children.

A spokesperson for the council told SWNS: “Difficult though it is to countenance, some unscrupulous individuals do exploit the name of charitable funds for their own personal gain.

‘To protect the public from these bogus collectors, people wishing to collect cash donations at public events need to apply for and carry an official permit.’

‘Members of our team spoke with Mr Armstrong to explain that because he did not have a permit, the money he had collected from the public would be taken and deposited with the We Love Manchester Emergency Fund on his behalf.’

‘There is no suggestion that Mr Armstrong’s motives were anything other than good, and we hope that he will understand that the permit process exists with the important aim of protecting the public from rogue collectors.’

‘The money he raised will help to support those who have been injured or bereaved by the attack.”

One thought on “THE REAL-LIFE SIDESHOW BOB?: Fundraising clown criminalised by UK council”