A shop owner of Indian heritage, who was allegedly abused by racists and warned off his show of support by a fellow Indian after adorning his business with the flag of St. George in support of the England World Cup football team has vowed to fight back against the prejudice he suffered by increasing the number of flags flying at his shop, the Ilford Recorder newspaper reported today.

The unnamed owner of GMS Heating & Plumbing Spares, Ilford Lane, in the London-Essex town of Ilford, a Sikh Punjabi, declared his backing of the ‘Three Lions’ team by placing the distinctive red-and-white cross of England around the outside of his store, as well as a string of smaller flags of all the national teams in the World Cup across the shopfront. 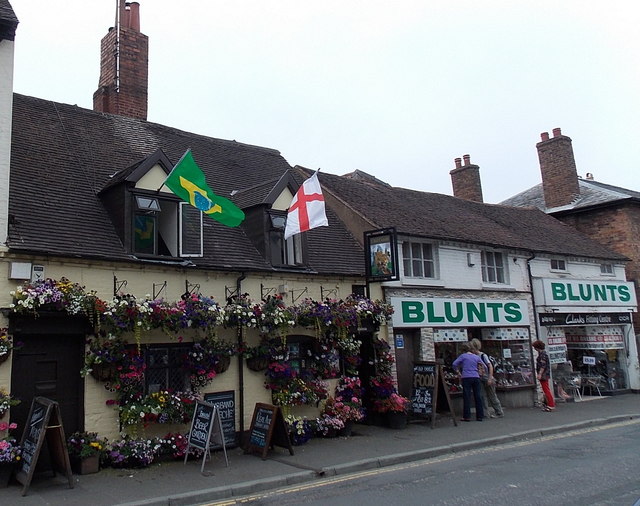 The decorations riled some locals, who did not understand why a person of Indian origin was supporting England, even though he had lived in the country for forty years and had been supporting the national team for twenty years. Staff at GMS began receiving hate mail and letters criticising their manager’s allegiances. One handwritten missive accused the manager of forgetting his heritage and disavowing his culture and skin colour. The rambling letter went on to say that if National Front racists had seen the flags, the shop owner would have been ” [kicked] back to Indian with out (sic) your trousers on and give you flower (sic) to take”

The note, written anonymously and addressing the GMS owner as ‘Uncle’, annoyed the man and he has vowed to now add more England flags to his football display.

The manager told the Recorder that the letters would not stop him supporting his favourite side, but that it had cast a shadow over the store’s World Cup celebrations.

“It is shocking how backward minded people think that by supporting the country you live in you will be dishonouring our religion or insulting India,” he added.

“These are the wrong people, not the ones who enjoy being part of the English culture.”

David Landau, a senior caseworker at the local people relations charity Redbridge Equalities and Community Council, said abuse in any form should not be tolerated and needs to be reported.

“This is a rather unusual situation but abuse is abuse and if someone is abused for putting up England flags this is wrong,” he said.

“It shouldn’t be happening and racism needs to be condemned.”

Another South Asian-owned business on the same Ilford road, which runs through the far west of the town along the border with Newham, also reported receiving similar letters after they also flew English flags outside their premises.

© Copyright Jaggery and licensed for reuse under this Creative Commons Licence.

One thought on “SUPPORTING ENGLAND DESPITE THE HATERS: Shop manager stands up against football racists”