While the capital of Serbia is not the first place that comes to mind for many when they think of a holiday destination with culture, history and impressive sights, Belgrade is in some ways an undiscovered treasure for those looking for something a bit different, but still ticking all the boxes.

Belgrade, known to its residents as ‘Beograd’, has an ancient history of settlement dating back to the Roman Empire. It was ravaged by the hordes of the Huns, and became an outpost of the Turkish Ottoman empire. In latter years, it was the capital of the Communist union of Yugoslavia, and saw much fighting, bloodshed and bombing during the collapse of that country in the early 1990s. By the end of the decade, Belgrade was bombed by NATO forces during the independence war of Kosovo. After all that mayhem, Belgrade has reinvented itself as a hip city of fashion, art and music that attracts young European things like wasps to honey.

Even with the modernisation and revamping characteristic of Belgrade now, the city has not let go of its history. Of particular importance is what is called by English-speaking tourists the Fortress. Located on the right bank of the Sava river which cuts through the city, the Fortress is chunky, stony and covers a great area of land, an inspiring monolith of masonry. The complex is said to be the final resting place of the great marauder and general Attila the Hun and was once the greatest military fortification in all of Europe.

The Fortress predates the Hun though. It was built in fact by the Romans who needed a strong fortification on the eastern fringes of their expansive empire to protect against tribes looking to overrun the territory. It was at first a Roman military camp and the largest structure in Belgrade’s ancestor, known in Latin as ‘Singidunum’. 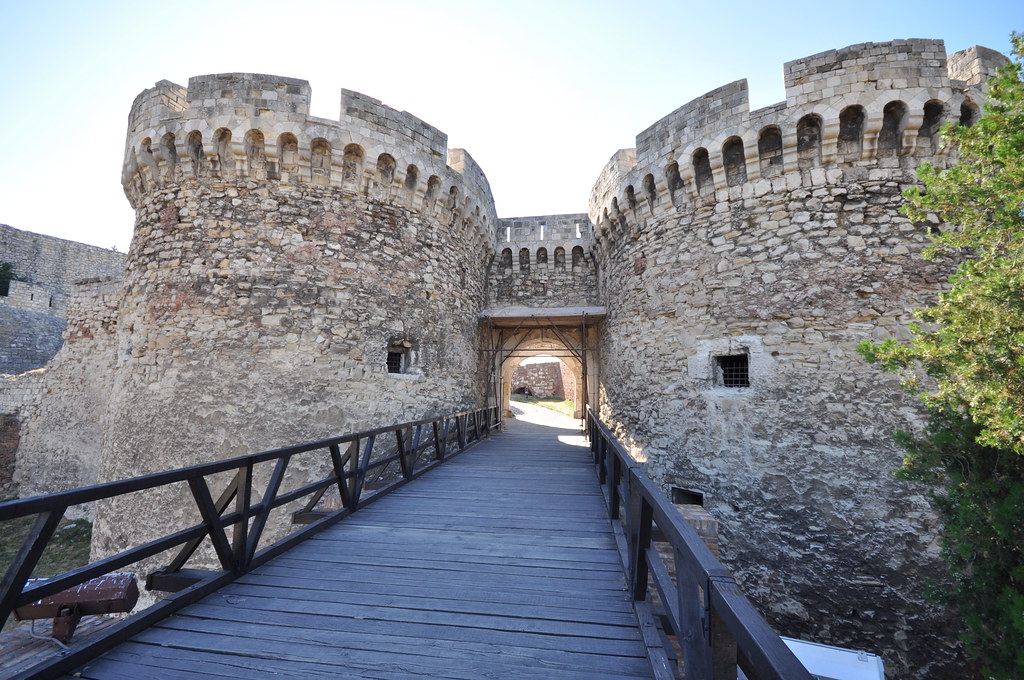 After repeated incursions, the Ottoman forces overran Belgrade in 1521. Impressed by the magnitude of Belgrade’s Fortress, the Turks rechristened it Kalemegdan (or in modern Turkish “Kalemeydan”, (kale – city and megdan – field) and added two structures, the first being the fountain of Mehmed Pasha Sokolovic, the other the tomb of Damad Ali Pasha.

Over the years, the fortress became a hot potato, constantly passing between the rule of the Turks and the Austrians. The Austrians also added some cosmetic changes to the Fortress, mainly to its outer wall. The Turks were said to have preferred the local white rock (that is said to have given Belgrade its name) for their renovations, while the Austrians opted for traditional red brick.

From being a military showpiece contested by regional powers, the Fortress wound up with a less dignified role centuries later. As Yugoslavia dwindled in size in the 1990s, local entrepreneurs turned the Fortress into a nightclub, playing probably house music inside a castle, you could say. Eventually the city government renegotiated the terms of use, and the Fortress was reborn as a local tourist icon and a museum.

The Fortress is split into four parts linked together via eighteen gates in total. The Fortress is large enough that it is considered as two phases, the Upper and Lower Towns, which are home to Orthodox churches, a planetarium, an apparently claustrophobic World War II bunker, and various monuments and museums.

Highlights available to visit today at the Fortress of Belgrade include a collection of Roman sarcophagi, gravestones and Christian church alters brought in from all of Serbia, the National Museum’s Collection of Stone Monuments. The Roman Well (which was actually built by the Austrians with their usual red bricks) was built for water supplies for troops, can be visited for a fee. There is also a clock tower and the 500-year-old Nebojsa Tower, built for the unsuccessful defence strategy against the Ottomans. Indeed the Fortress is essentially a combination of monuments of historical importance, museums, places of interest, religious buildings and parks, mostly with free entry and reasonable opening times. The fortress is also an UNESCO World Heritage Site.

“Belgrade Fortress, once one of the most powerful military strongholds of Europe” – Jorge Láscar, Flickr (20 August 2012) https://www.flickr.com/photos/jlascar/13810353553