The crimewave affecting London now has taken an even nastier turn, as newspaper Metro reported yesterday that four children in the south of the city were attacked during a scuffle, with one harmed so badly that witnesses said they were ‘disembowelled’.

A fight was alleged to have broken out between two groups of teenagers, aged 15 to 16 years, at the Landor House, a block of flats on the Elmington estate in Camberwell. Four children were taken to hospital, with one boy suffering serious injuries and is now fighting for his life. The incident occurred on Thursday at around 5:25 pm. 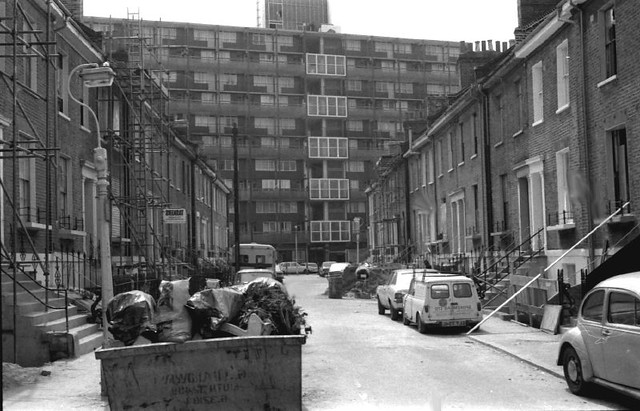 Six of the attackers were arrested by police. Pictures and videos from the scene show police officers huddled around the injured, desperately administering first aid, as they awaited the arrival of an ambulance crew, Metro reported.

One teenager was heard to shout ‘help!’ as he was ambushed. Witnesses to the disorder reported seeing one youth lying on the ground with his intestines spilling out of his torso. Others described the scene of the fight, saying that it was ‘bloodied clothing, trainers and medical equipment’. Locals believed the teenagers were from outside the estate. One witness told Metro: “Ten minutes before the stabbing I saw a whole heap of youths run down… (towards the crime scene)”. Metropolitan police sources gave an update on the conditions of the victims, stating: “One remains critical, one is in a serious but stable condition and the remaining two did not suffer serious injuries.”

‘Then 10 minutes later I heard people shouting and bawling out the back there. When I looked round the back there, I saw the youth come running from the block.’

‘He came to the corner and dropped. He was holding his belly and all of his intestines were falling on the ground.”

Local police superintendent Annmarie Cowley told Metro: “This incident is in its very early stages and at present we cannot speculate on what the nature of it may be. What we can say for certain is if there needed to be an example of the utter senselessness of knife crime, then this is it.

‘Four males are in hospital, and at this stage we cannot say how serious their injuries are. It is beyond comprehension.”

Police have increased their presence around the Elmington estate and surrounding areas. Legislation has been invoked to grant officers powers to deter further trouble overnight, in the likelihood of revenge attacks from associates of the victims.