Imagine you’re in a dark forest. It’s getting late and the shadows are getting longer. You decide to find somewhere to bed down for the night, and by chance, you stumble upon a cave. Out comes your sleeping bag and jim-jams, and as you switch on the nightlight, you become aware of fluttering motions above your head. Hundreds of small shadows flutter erratically about the cave ceiling above you. Parts of it appear to be moving, a strange fuzzy mass with leathery wings sprouting from it and then flying towards yo as you cower!. Now if you haven’t yet run out from the cave screaming in abject terror, you may have realised you’re sharing your au naturel hotel room with a colony of bats, the flying mice of horror legend.

One of the most distinctive things about many of the 900 to 1,200 species of bat found in the world today (they make up a fifth of the entire mammalian global population) is they have this habit of resting upside down, literally hanging around, as they congregate in groups ready for a night’s routine of activity. This especially applies to subterranean species. But why do they adopt such a strange, and at least from a human perspective, fairly uncomfortable-looking position? Well, the main reason is it helps them if they need to fly off quickly somewhere in search of food or to flee predators. 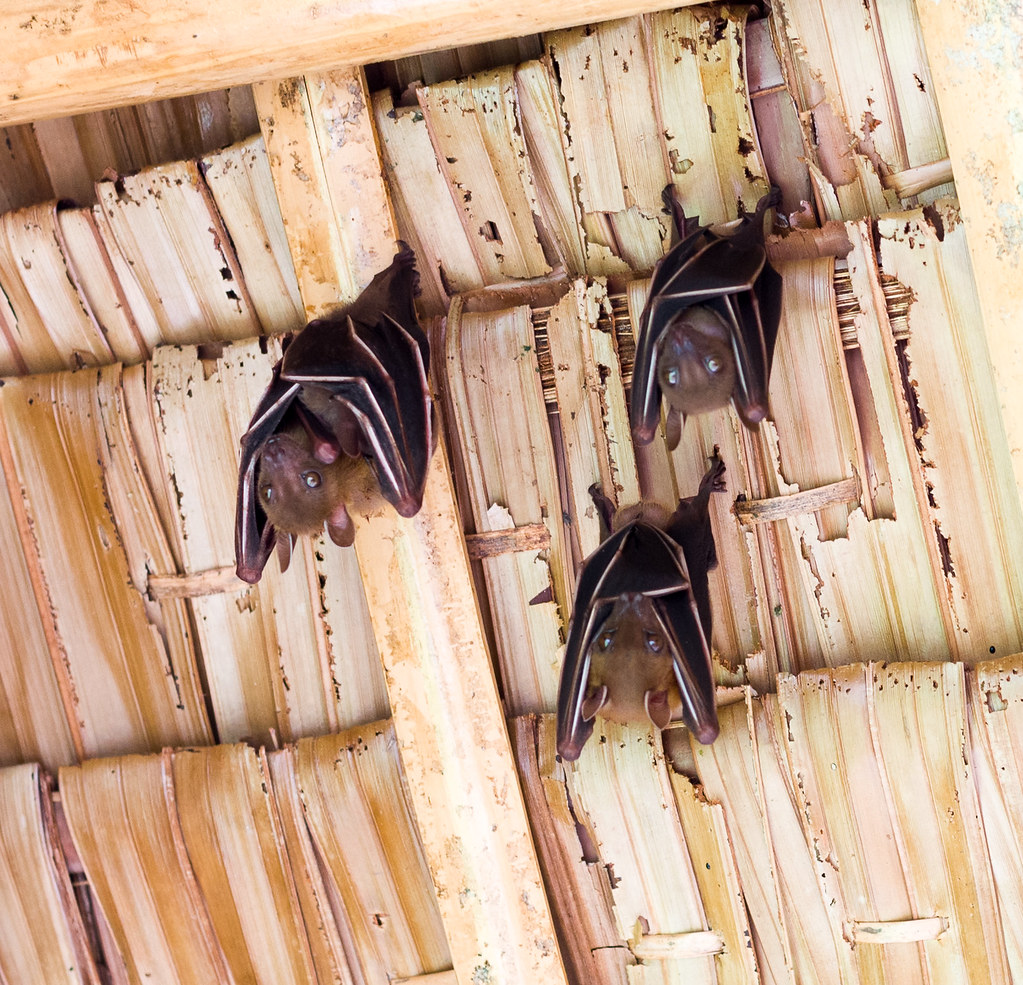 You see, bats are delicate animals, and their wings, as big and impressive as they are in relation to the size of the beast, are not that physically strong. Unlike birds, which can just run a bit along the ground and then just rise upwards, or just take off near-vertically, as pigeons can do, bats have to hang upside down so they can at first drop vertically and then take flight.

Although a bat on the ground can technically take off to escape your scaredy-cat backside as you run screaming from his mates in the cave, it would be very difficult for him to do so. According to U.S. bat researcher and expert Stefan Pociask, birds and insects do not have a problem lifting off from the ground as their wing composition and ability to make a leap from a stationary position enables them to achieve sufficient traction to achieve aerial movement. Birds have lightweight, air filled bones, whereas insects do not have any bones at all, meaning their bodies are better designed for the concept of flight. The bat, being the only true flying mammal, has in common with all other mammals, heavier and denser bones, which combined with its weaker wings, makes it very difficult to achieve immediate ground-to-air flight. The bat also lacks another valuable aid in flying like birds. It cannot perch as a bird can, because it does not have the automatically locking tendons in its feet that birds employ to maintain a firm grip around their perches.

According to Pociask, the bat evolved to compensate for this flight flaw by instead taking off from above. The bat makes use of gravity itself to assist it in its trajectory. The bat will literally drop off its resting place on the cave’s ceiling, fall a few centimetres as gravity kicks in, and then release its leathery wings to power away into the cold night air and your nightmares.

Bats also hang upside down for other reasons too. Their small size and lack of defence mechanisms means they are easy prey and bats have evolved to hang in those strange positions simply to make life difficult for would-be assassins. By roosting on high branches or cave roofs, they can escape most of their predators, who cannot fly or climb. They therefore stay out of reach of any potential aggressors. It also helps that bats are nocturnal (awake at night, asleep during the day), whereas most of their predators, such as snakes and weasels, are active during the day (diurnal). However some predators do attack bat roosts when they are asleep, and even birds have been known to enter bat colonies and peck individual bats to death. But thankfully, the peculiar skill of resting upside down has served the bat well. It is the second most common type of mammal, after the rodents.