The yearly monsoon season, with its overcast skies and fast and strong downpours of rain, often brings hardships for the people of India’s most populous city and financial capital, Mumbai, but an exceptionally furious monsoon this year so far has brought untold misery on the city of 22.5 million. In the worst set of rains seen for decades, the death toll from victims of the rain and floods is rising quickly, with fifteen alone dying from the collapse of poorly-built walls saturated with moisture.

The British Asian newspaper Asian World reports that many Mumbaikars have fallen victim to drowning or wall collapses this season. In the district of Malad East, 21 shanty town dwellers were killed by a disintegrated wall that fell on their huts, while in the same area, two men died after their car was caught in a swell, drowning them. 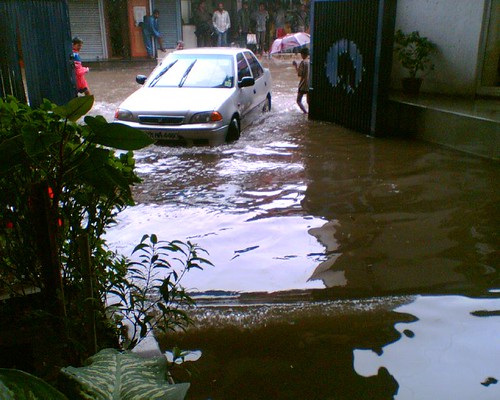 In the Kalyan area, the wall of a local school collapsed onto a nearby house, killing three. The city’s administration say that this is the worst flooding to have hit Mumbai in recent memory and have railed against poor construction standards in the city, which have led to many badly-built edifices just simply falling to the ground. A large part of the recent death toll has been labourers working on unregulated construction sites on Mumbai’s outskirts.

Mumbai’s rail network, one of the world’s busiest, experienced widespread track and station closures as it struggles to cope with the unusually intense flooding. Railway officials ordered several rail lines leading from Mumbai’s suburbs to the centre to be shut down as they remained aghast at what they described as ‘nature’s fury’.

Mumbai’s central air hub, Chhatrapati Shivaji International Airport, also known by its older name, Sahar Airport, had its main runway closed after a plane landing on it skidded in the heavy downpours. No injuries were reported, but emergency safety measures were drafted in, leading to fifty flights diverted and another fifty cancelled.

With the average daily rainfall in Mumbai now measured at 200 millimetres (7.8 inches), residents have been advised to remain indoors and to stay away from flooded parts of the city. Many locals have spoken out against civic authorities for being complacent in preparations for the abnormally heavy rainfall, despite the monsoon season arriving every year from June to September in India.